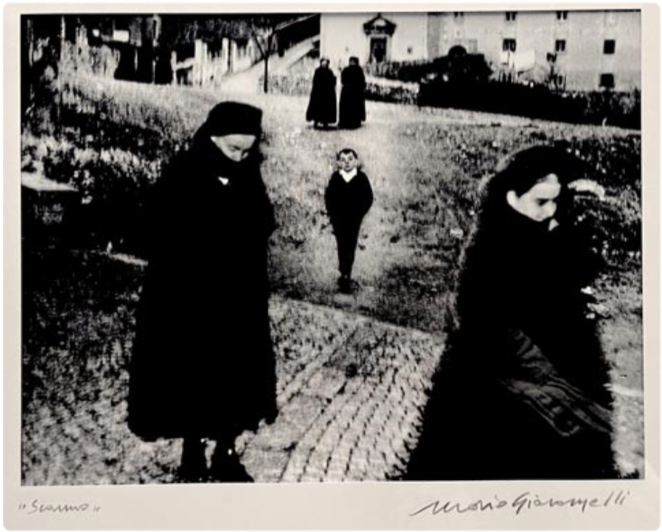 Simona Guerra published a remarquable essay on the young Scanno Boy : Il bambino di Scanno, Edizioni Postcart, 2016
"On October 19, 1957, Mario Giacomelli left for Scanno, a small town in Abruzzo, together with his friend, photographer Renzo Tortelli.
On several occasions, talking about the motivations that had pushed him to go, Giacomelli ex- pressed himself by saying that he had been struck by a man's story about this village where ani- mals circulated freely, cars could not turn because of the many steps and where people dressed all in black.
In reality, it seems impossible that he didn't already know the notoriety of Scanno, since for some time this village had been a popular destination for photographers. Also in the wake of the great ethnological investigations undertaken by many researchers and photographers, the south of Italy kept in the collective imagination that hint of exoticism absent in the rest of the Belpaese; moreover, Scanno being one of the most suggestive places of the south of Italy, in 1951, the pho- tographer Henri Cartier-Bresson had realized a reportage of extraordinary beauty.
Mario's journey began by train, late in the evening. From Senigallia, his hometown, he arrived in Civitanova Marche, where his friend Tortelli was waiting for him and with whom, in a small Cinquecento, he undertook the journey at night to arrive at dawn on Saturday the 19th [...]. At the beginning Mario told me that his trip in 1957 was the only one in which he took pictures of Scanno with great passion and transposrto. He said that afterwards he returned to that 'fai- rytale village' only once, in the first days of May 1959, but that however, on this second occasion, he almost didn't take any pictures, because for him the place had lost that initial magic. Actually from many documents we know that he returned to Scanno many other times afterwards, espe- cially after his most famous photograph became known in the world.
At the beginning the date of the shot was always declared by Mario as 1957, while later on, in catalogs, exhibitions and in some interviews he started to declare two dates for the work done in Scanno: 1957 and 1959. He always maintained his position that the second time he almost didn't shoot for the reasons mentioned above. Which photographs, then, were taken in 1957 and which in 1959? More importantly, in which year of the two was the photograph of the child actually taken? is remains a mystery. »